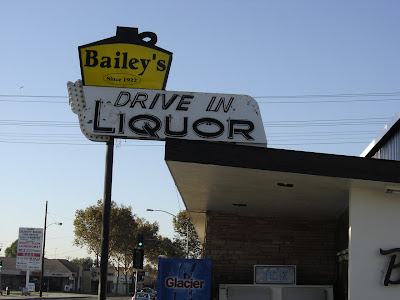 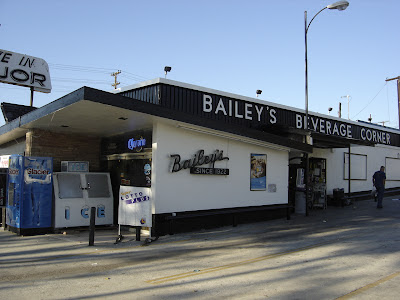 Ok, it's been open since 1922, so it's not quite Googie, but I still get a kick out of the architecture, the shapes, the signage, and the fonts enough to post it here. It's a Googie precursor, a predecessor if you will. And don't worry, you purists, I'll be coming home to Orange County soon (as in once I find time to do some more hunting!) Until then, enjoy Bailey's. 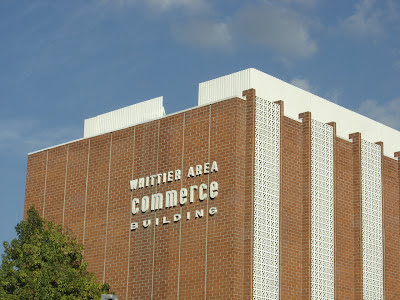 As a graphic designer, I find myself not only enthralled by Googie's and Mid-Century Modern's architectural forms, but also the typographical particularities of the age. I usually find a combination of these two great design elements only in neon signage, so it was a treat to finally take notice of this building, sitting on Whittier Blvd. as it likely has for decades. Geometric and decidedly Modern, the building is livened considerably by the typography which describes the building's purpose. The tracking, the kerning, the mish-mash of uppercase and lowercase letters-- it's enough to even get the most jaded and cynical of designers to smile a little!

Maybe this isn't the best example of lettering from the era, but with months of studying Googie, it's easy to wonder where the joy of gimmicky typography went, and why we don't live in a world where the "Googie's" logo for which this whole architectural movement is named isn't functional today, in a design sense. It's kitsch, it's retro, it's almost pandering, but Googie typography is fun and carefree. I hope fun typography will make a comeback someday.