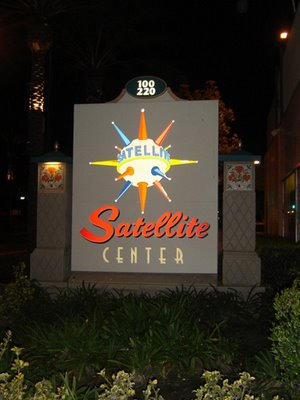 Although nowdays it's the standard for Googie architecture to be removed for the "greater good" of the community and "progress," sometimes there sign regulations can manifest a snarky little jibe at the city council, too. Case-in-point, the Satellite Market in Anaheim. Located right off the 5 freeway at Katella, the glowing metal sputnik that used to grace the top of their sign was claimed by progress in 1999, when the city began revamping the Anaheim Resort area to prepare for all the revenue that Disney's now-failed California Adventure park would pull in, and also for widening of the I-5 freeway.

But, the clever shop owners at the Satellite couldn't just let their beloved sputnik be dismantled completely. Instead, they threw a big "F you!" to the establishment, putting a vector-based image of the same sign on their new, city-mandated sign, identical in shape and size to every other sign on the street.

The sign was apparently saved by a fan and was stored in a backyard in Pasadena, according to anaheimcolony.com [link] The American Sign Museum in Ohio now has the Satellite sign as a part of its permanent collection. [link]

An homage to the Satellite Shopland's sputnik of the past: 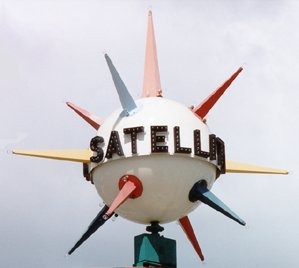 In a way, Googie's shopowners can preserve a shell on their history. At Satellite Shopland, still a good old-fashioned market, they have done just that.
Posted by melissac. at 10:26 AM

totally and perfectly great. love that you include a shot of the original satellite. thanks for continuing this great blog!

Wonderful! Man do I miss that satellite...

Aw, I remember the satellite when I was growing up in Anaheim. I thought it was cute. To bad it had to go. At least it went to a museum and not a junkyard.

Would you mind linking my photo of the "satellite" back to my website at www.SpaceAgeCity.com? Thanks.